Finally, Whitsun tournament again. After a four-year break, the traditional soccer tournament of TuS Stemwede will finally be continued again next year. In 2023, there is to be the already 42nd edition of the international U19 tournament and even on the traditional date of Whitsun, on May 27 and 28, 2023.

“Even though the time is currently very challenging and predictions are often difficult to make, we, our club, the entire team of helpers and many partners and sponsors behind us, want to tackle the tournament restart,” explains Wolfgang Rosengarten from the tournament management. At a meeting with Mayor Kai Abruszat, Rosengarten and his colleagues from the tournament team informed what is planned for the tournament continuation at the end of May. “If you think that so far more than 150 different clubs from 40 nations were guests at the tournament of TuS Stemwede, then I am pleased that this tournament tradition will be continued again,” said the mayor. “Without question, this tournament has an enormous sporting significance, far beyond the district of Minden-Lübbecke. But above all, it has also made the name of Stemwede known throughout the world.” 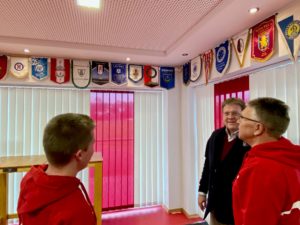 Looking at the many pennants hanging in the Wehdemer Sportheim, Rainer Kröger (right) and Tim Wehmeyer (left) reported on the team plans for 2023. “I’m curious to see which club pennants will be added” said Stemwede Mayor Kai Abruszat.

The fact that it will actually be a Whitsun tournament again is mainly due to the DFB’s schedule. “Whitsun is one of the very few weekends on which the teams of the U19 Bundesliga do not have to play and are therefore available for tournaments at all,” explains Rainer Kröger, who together with Tim Wehmeyer takes care of the commitment of the teams in the tournament management. “The DFB kept putting us off throughout the year and only informed us of the approximate match schedules at very short notice, at the end of October. Therefore, we could only go into the concrete tournament planning after that.”

The new start will not be without changes. For example, in 2023 there will only be a field of six, instead of eight participating teams. The goal is to once again have a mixed field of participants from Bundesliga teams as well as international teams. In any case, the Mühlenkreis-Team, the selection of local young talents, will also take part.

“The last tournaments before the forced break in 2019 were associated with an extremely high level of effort,” the organizers recall. “There was also the desire from the circle of our many helpers to reduce this effort a little for everyone involved. With fewer teams in the field, there will be two tournament days in the future and thus one less.” However, it is also certain that there will be the traditional penalty shootout for the clubs and associations from Stemwede and the surrounding area, in any case again. “This event is cult and must not be omitted,” says tournament management member Ingo Haremsa. And the international Lebenshilfe-Cup for people with disabilities will again be integrated into the U19 tournament.

Looking through the sportsmen’s home of TuS Stemwede, where quite a few pennants hang from clubs that have played at the Stemweder Berg in the tournament history, Mayor Abruszat asks himself which pennants will probably be added next year. “I am sure that we will once again see first-class youth soccer and Stemwede will once again be an excellent host for the athletes and guests from near and far.”